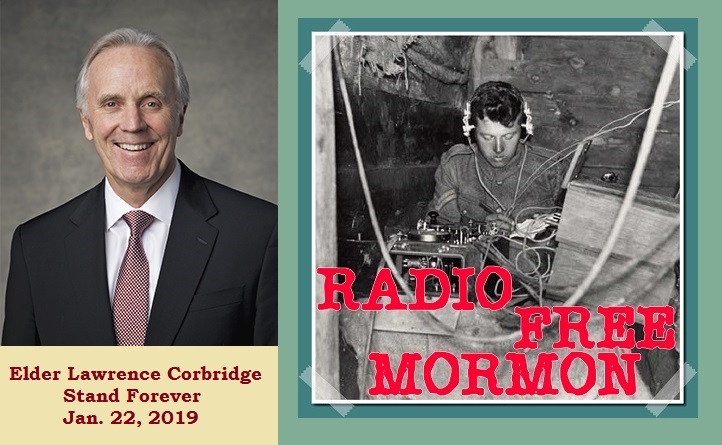 Today on Radio Free Mormon RFM and Bill Reel dissect the talk Stand Forever, given on the 22nd of January 2019 by Elder Lawrence Corbridge, a member of the Seventy of the LDS Church.  Several Major Points come out

– Elder Corbridge seems to have had a level of faith crisis himself while on assignment from the Leadership to dig into “antagonistic material” regarding the Church.

-His gloom while claimed not to be Cognitive Dissonance (Belief Bias) and instead to be the absence of the Holy Ghost is irrational and illogical.

– Elder Corbridge argues that the Divine method (Spiritual Feelings) trumps the Scientific Method, the Analytical Method, and the Academic Method (actual science) in spite of the Divine Method being historically demonstrably less effective at arriving at truth.  Even Prophets when allowing the Divine Method to trump the Other three have been led to great error decades on end.

– The reason the Divine Method is held up as superior and trumps the other three because the other three if allowed to be given their weight all lead the honest seeker of truth out of the Church.  Meanwhile the Divine method is the only method the Church can use to manipulate the person who wants the Church to be true to believe it is true.

– And they finish speaking to how much of his own faith crisis Elder Corbridge has exposed within his talk.